I have already mentioned in my article on the Teatro Massimo that the building dominates a very central square in Palermo. From Piazza Verdi, many of the city tours meander off to explore the wonders of a city that boasts an entire UNESCO itinerary, unique in the world with its Arab-Norman style.

What I have not told you yet is that right behind the theatre, in one of the four ancient districts of the city, is one of the liveliest historic markets of the city: il CAPO.

Streaty tours, which is now present in several Italian cities, is one of the operators that will take you off the beaten track to the most authentic areas of Palermo on its street food tours, which combine local gastronomy with art in perfect “street style”. You walk around with your mouth watering, always ready to take the perfect photo in a lively area filled with stalls, fried food, local specialities, and, most importantly, real o locals.

Setting out from the theatre, you immediately reach Porta Carini, the historic entrance to il Capo Market. Panelle (Sicilian fritters), cazzilli (croquettes) and the legendary sfincionello (fried pizza dough) are all preceded by the queen of street food: the Arancina. A feminine word, because the celebrated rice ball, which is so terrible for low calorie diets, is a SHE. The Arancina is a “fimmina” (female) as all Palermitans say, in eternal rivalry with their Catanian cousins.

Once you have finished strolling around and tasting food at il Capo, at Vucciria Market you can enjoy a glass of local wine in the iconic places that have made the history of the Market it is, involving incredible characters that inhabit it in the mornings, who have now been regulars for decades.

Today, the district is among the most popular places for night-life, when the air fills with aromas and smoke from the “rarigghie” (grills) of the “stigghiolari” (veal or lamb). On their grills, now often in the morning too, mangia e bevi, sasizza e stigghiola are sizzling away. Let me explain what these are: the first is spring onion wrapped in pancetta, followed by the legendary Palermitan sausage with fennel seeds, and topping it all off with the famous veal or lamb intestines. Ranking them is impossible: they are all specialities for which any Palermitan would sell their soul to the devil just to satisfy their desire for these sinful delights!

If the arancina is the queen of street food, u Pane ca meusa is the king. It definitely isn’t to everyone´s taste. But you cannot claim to have been to Palermo unless you have at least tried one bite. We are talking about a rolls stuffed with chopped veal lung and spleen, “schettu” (single), meaning with just lemon, or “maritatu” (married), with Sicilian caciocavallo cheese added.

LAST BUT NOT LEAST: GELATO!

Sicilian pastries are among the richest and most decadent in Italy, so our gastronomic tour can only end with a local desert: brioche with gelato in the summertime or a cannolo with ricotta in the cooler seasons.

And talking of desserts, in a previous article we talked about the best bakeries in Palermo, which are now very common in the city.

ALTERNATIVES FOR EATING, SITTING IN COMFORT

You will find the map indications at the end of the article.

A FEW STEPS FROM THE THEATRE

If you don’t want to be on the road, nearby the theatre there are various choices for lunch or dinner.

Right in front of the theatre, via Maqueda is flourishing and has undergone a complete restyling: thanks to its pedestrianisation, which began around six years ago, the main street of Palermo is now strewn with bars, pizzerias, street food stalls, bistrots, and osterias.

Walking as far as Quattro Canti, the now celebrated Bisso Bistrot will give you the thrill of a complete meal for just 15 euros, drinks included. It is a traditional osteria, but at the same time modern in its management style and has brought new value to the original spaces of the historic bookshop Libreria Dante.

If you want to taste carefully handled fresh fish, by means of a side street leading from via Maqueda you can reach Piazza Sant’Onofrio and enjoy a bit of fresh air at Pani e Alivi, also an osteria, specialised in seafood.

Another safe bet, if it is fish you want, is Osteria Mercede, right behind the Teatro Massimo, not far on foot. Its chef, Helios, is a star performer with a magic touch, and has created his dream of an osteria for just a few close friends, where he pours his heart into the strictly Sicilian recipes he cooks.

Beyond via Maqueda and right opposite the theatre, is the nightlife area that we have always called “Champagneria”. In fact, Champagneria, now “Bottiglieria del Massimo”, is just one of the bars in the area, but it is so well known that the whole area became known by that name by extension. It has an extensive selection of wines and beers on the menu. Also worth a mention in the area, are FUD and the Vespa Cafè, known respectively for their excellent Sicilian burgers made with local products and the delicious appetisers to share.

OSTERIAS FOR ALL TASTES

Traditional style and food at modest prices to taste the most local dishes you could wish for.

By crossing Vucciria and going along Corso Vittorio Emanuele, you can reach Osteria Ballarò on via Calascibetta, for a more intense dinner, full of atmosphere. It is an osteria by name, but is actually a high-level restaurant, refined, but with a warm and charming atmosphere.

Do you want to sample local delicacies, but not the osteria type? Well, just carry on down Corso Vittorio Emanuele to reach the Piazza Marina area.

In via dei Bottai, a characteristic and compact little street right behind the square, there is a little place specialised in bread and local produce: it is called “Mooddica”, which is a play on words, as muddíca, which means the soft part of bread in Sicilian. Here, precisely bread, in all its forms and varieties, accompanies platters of cured meats and cheeses, with little home-made samples on the side in line with the seasons and local availability. There is no shortage of artisan beers and excellent wines, and some of the best cannoli in all Palermo.

Other local delights, with a medium-high price range, at around 20-30 minutes on foot from the theatre:

Here, you will be licking your lips at the excellent fish dishes with the most innovative pairings. The menus are revised periodically, taking seasonal produce into account.

Well, what can I say?

You don’t need me to convince you: Palermo sells itself. It is a place that has everything: art, history, traditions, good food, night life, wonderful people, sun, sea, and surroundings not to be missed. What are you waiting for? Hurry and book a Volotea flight, the locals are dying to meet you… and to feed you!

Wine has a long history on the island of Santorini, dating back to the prehistoric Thera. The island’s volcanic soil plays a key role in making such exquisite wine, preventing pests like phylloxera, which destroyed many of Europe’s oldest vineyards making it one of the oldest wines. The wine is characterised by highly acidic, mineral, […] 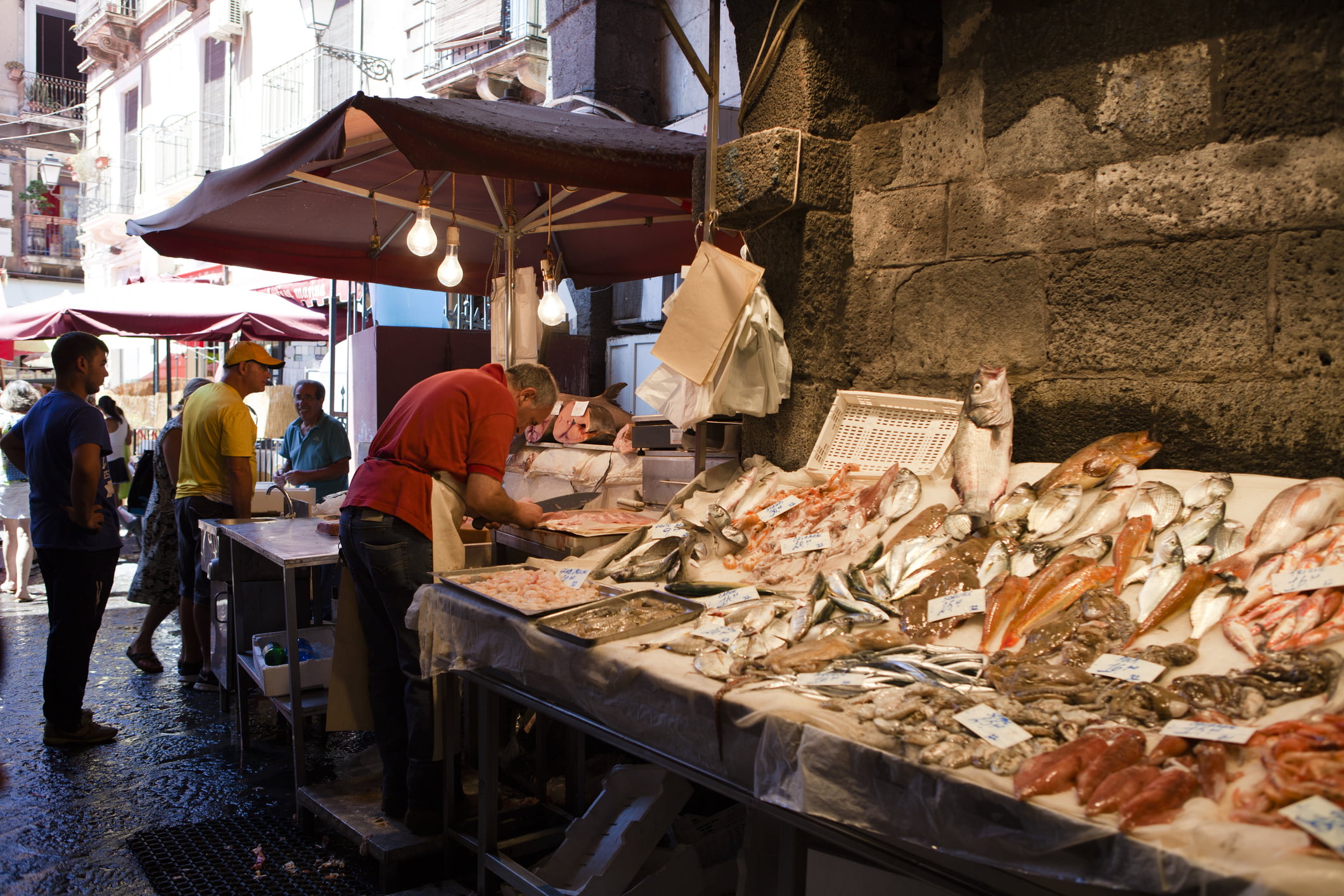 Catania
A journey through the flavours of Catania’s fish market May, 17 2021

To discover Catania like a true Catanian there is one thing that you absolutely cannot miss during your visit to the city: a tour of the fish market, otherwise known as ‘A Piscaria’ (in Catanian dialect). Catania’s Piscaria is the city’s old fish market, which has welcomed market vendors, fishermen, street sellers, casual visitors, tourists […] 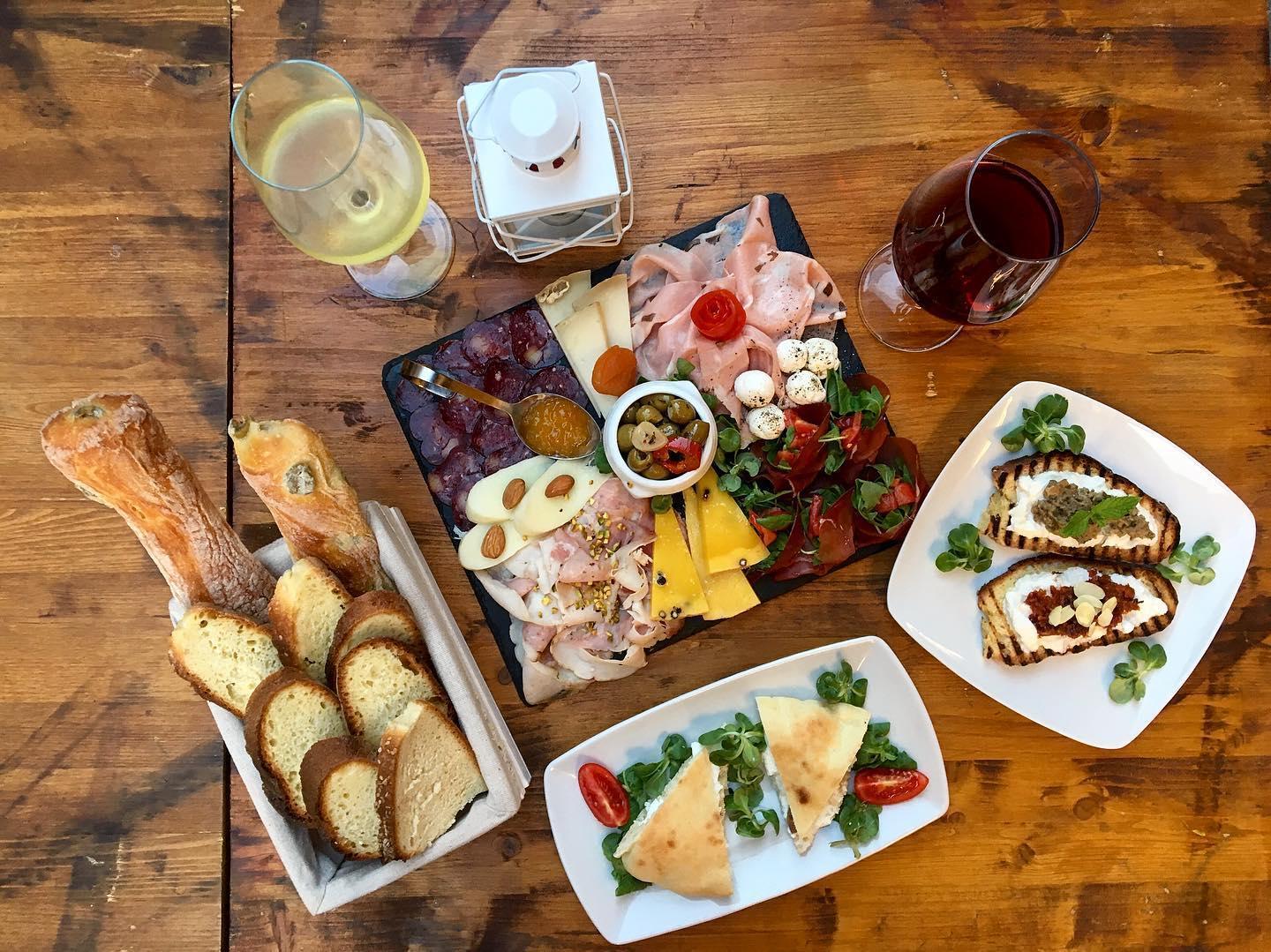