Possibly the most authentic city of Italy, Naples has been the meeting point of empires and cultures over the centuries.

Fiercely authentic, it’s remarkable history, landmarks and, most of all, the genuine character of its people, have made this city one of the most interesting destinations to visit in the Mediterranean. Looking up to Mount Vesuvius (the volcano that turned the Roman city of Pompeii into ashes) and a boat ride away from the islands of Ischia or Capri and the Coast of Amalfi, Napoli, its italian name, has almost everything one could wish for a perfect holiday or visit: breathtaking landscapes and coastline, a buzzing city center with hundreds of surprising corners, amazing food and colorful people.

Naples has been the inspiration of many, including the Neapolitan Novels by Elena Ferrante, or by Hollywood classics like It started in Naples (1960). Admired within Italy and abroad, the experience of visiting Naples is most likely to stay with visitors for a long time.

In order to let you discover more about Naples, we recommend the following reads and films for those wanting to get inspired by the greatness of this city.

OUR RECOMMENDATIONS ON FICTION BOOKS 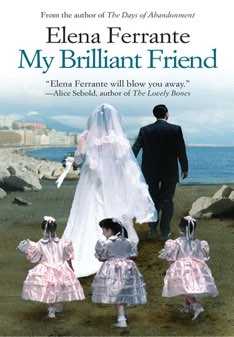 “A modern masterpiece from one of Italy’s most acclaimed authors, My Brilliant Friend is a rich, intense and generous hearted story about two friends, Elena and Lila. Ferrante’s inimitable style lends itself perfectly to a meticulous portrait of these two women that is also the story of a nation and a touching meditation on the nature of friendship. Through the lives of these two women, Ferrante tells the story of a neighbourhood, a city (Naples) and a country as it is transformed in ways that, in turn, also transform the relationship between her two protagonists.”

The Neapolitan Novels is a 4-book series about the psychological and life experience of two friends and their coming of age, from childhood to adulthood, as they try to make a life for themselves within the context and complexity of their poor neighborhood in Naples.

Through the lives of these two women, Ferrante tells the story of a city, and a country as it is transformed in ways that, in turn, also transform the relationship between her protagonists. These works have been acclaimed worldwide and been turned into theatre plays, and even an HBO series entitles My Brilliant Friend.

Elena Ferrante is the pseudonym of an Italian anonymous writer and possibly the most popular writer ever to write fiction books where the action takes place in Naples.

Ferrante is one of the world’s great storytellers. With My Brilliant Friend she has given her readers an abundant, generous, and masterfully plotted page-turner that is also a stylish work of literary fiction destined to delight readers for many generations to come.

“Ferrante transforms the love, separation and reunion of two poor urban girls into the general tragedy of their city.”
—The New York Times

“My Brilliant Friend, translated by Ann Goldstein, is stunning: an intense, forensic exploration of the friendship between Lila and the story’s narrator, Elena. Ferrante’s evocation of the working-class district of Naples where Elena and Lila first meet as two wiry eight-year-olds is cinematic in the density of its detail.”
—The Times Literary Supplement

“Elena Ferrante is proving that literature can cure our present ills; it can cure the spirit by operating as an antidote to the nervous attempts we make to see ourselves reflected in the present-day of a country that is increasingly repellent.”
—Il Mattino 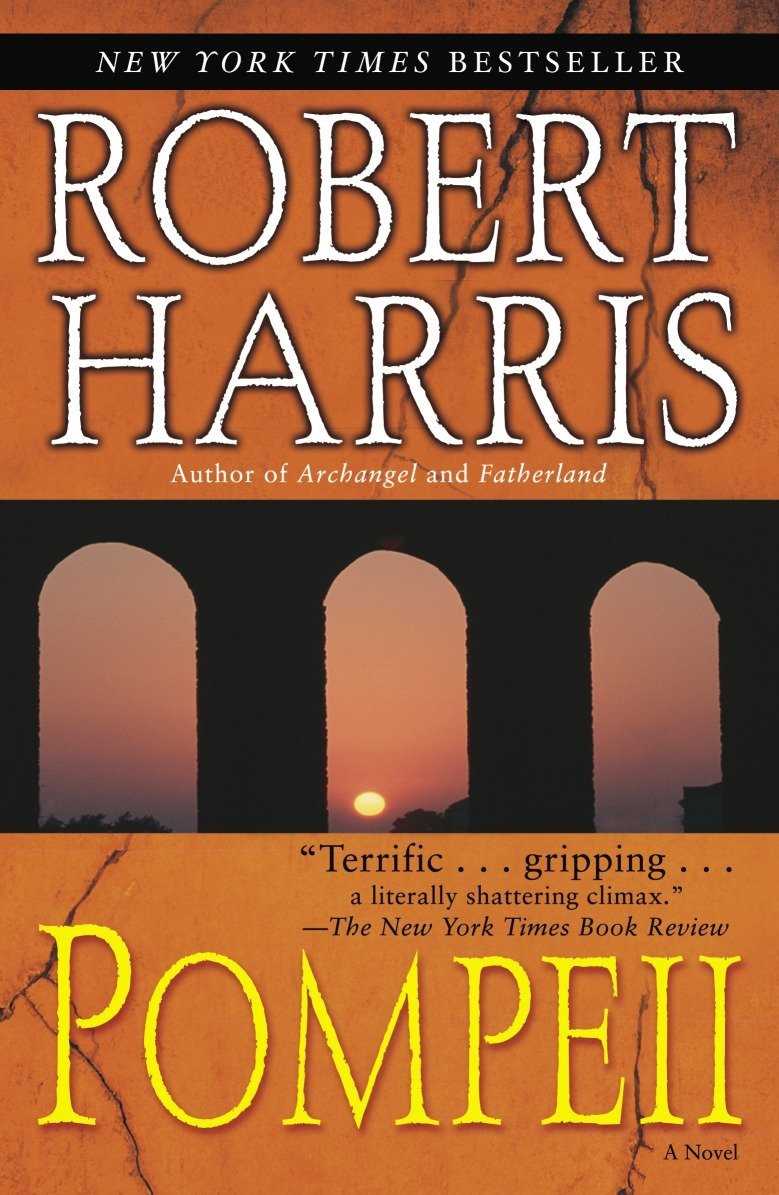 “With his trademark elegance and intelligence Robert Harris recreates a world on the brink of disaster.

All along the Mediterranean coast, the Roman empire’s richest citizens are relaxing in their luxurious villas, enjoying the last days of summer. The world’s largest navy lies peacefully at anchor in Misenum. The tourists are spending their money in the seaside resorts of Baiae, Herculaneum, and Pompeii.

But the carefree lifestyle and gorgeous weather belie an impending cataclysm, and only one man is worried. The young engineer Marcus Attilius Primus has just taken charge of the Aqua Augusta, the enormous aqueduct that brings fresh water to a quarter of a million people in nine towns around the Bay of Naples. His predecessor has disappeared. Springs are failing for the first time in generations. And now there is a crisis on the Augusta’s sixty-mile main line—somewhere to the north of Pompeii, on the slopes of Mount Vesuvius.

Attilius—decent, practical, and incorruptible—promises Pliny, the famous scholar who commands the navy, that he can repair the aqueduct before the reservoir runs dry. His plan is to travel to Pompeii and put together an expedition, then head out to the place where he believes the fault lies. But Pompeii proves to be a corrupt and violent town, and Attilius soon discovers that there are powerful forces at work—both natural and man-made—threatening to destroy him.”

ENJOY AN EVENING OF POP-CORN AND MOVIES 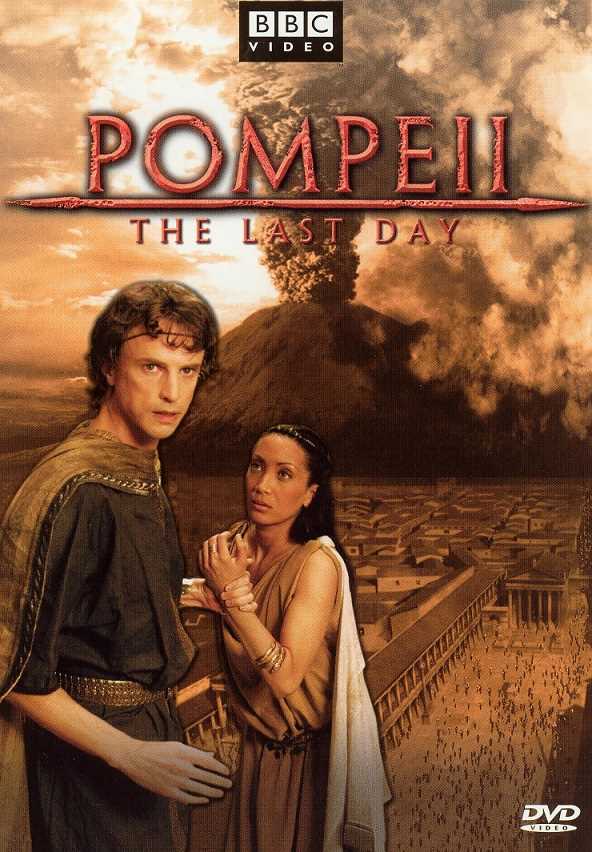 A dramatized documentary by the BBC that tells of the eruption of Mount Vesuvius on 24 August 79 AD.

This eruption covered the Roman cities of Pompeii and Herculaneum in ash, killing all those trapped between the volcano and the sea. The documentary portrayed the different phases of the eruption.

Step back in time and visit the vanished city on its last day, as the mighty volcano Vesuvius explodes in a 24-hour reign of chaos. On August 24th, AD79, Pompeii’s citizens witness day turning into night as 4 billion tons of pumice, rock, and ash burst forth from Vesuvius.

Pompeii: The Last Day uses archaeological evidence, including the writings of one survivor, to unravel and interpret the mystery of those final hours. Lavish special effects reconstruct each stage of Vesuvius’s cataclysmic eruption and its impact on soldiers, slaves, families, and lovers as they struggle with the unfolding tragedy.

“One of the greatest natural disasters – and most fateful days – comes to vivid life in this critically acclaimed dramatization.” 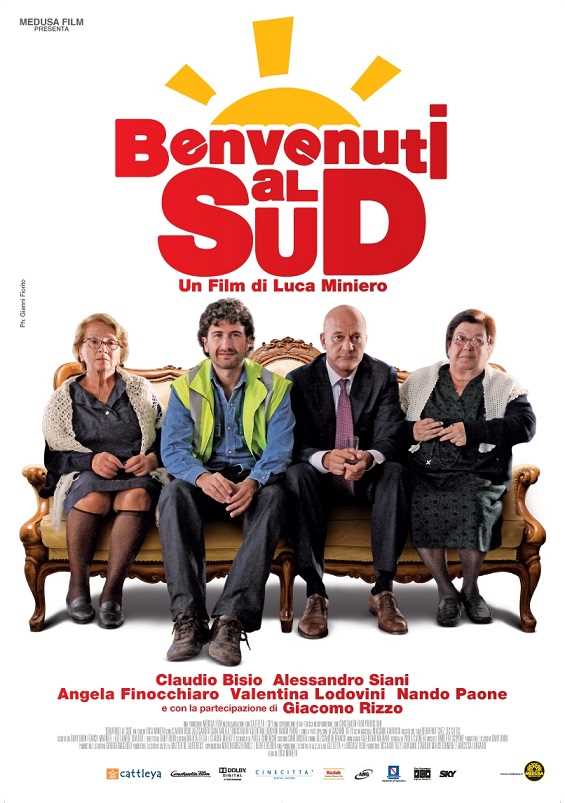 The frustrated postal manager Alberto (Claudio Bisio) is looking for a transfer to the city of his dreams, Milan, but is banished instead to a hole-in the-wall branch in the south. So terrified is the family of “down under” that Alberto’s wife (Angela Finnocchiaro) stays behind with their son.

Alberto arrives in a tiny town by the sea near Naples in a bulletproof vest and armed with typical northern Italian clichés about the south – it’s unbearably hot, dirty and full of thieves and killers. Of course, he’s won over by the warm and friendly locals, especially the postman (Alessandro Siani, the best of the bunch) and a postal clerk (Valentina Lodovini), who harbor a secret love for one another and who teach Alberto some of the impregnable local dialect.

The film requires much suspension of disbelief but it’s perfectly entertaining if silly fun.

What the film is trying to show us is the difference between the north and the south, to start with the language, then their way of life and the attitude of the southern Italians towards life.

Remember that if you would like to discover the most popular music in the South of Italy, you have our playlist in Spotify. Don’t miss out!

WHERE WE FLY FROM / TO NAPLES

If you already have made up your mind about visiting Naples, its tumultuous history, passionate people and the finest food in Italy, take a look at our flights offers and we will be delighted to take you there. At Volotea you can always book your flight at the best price. 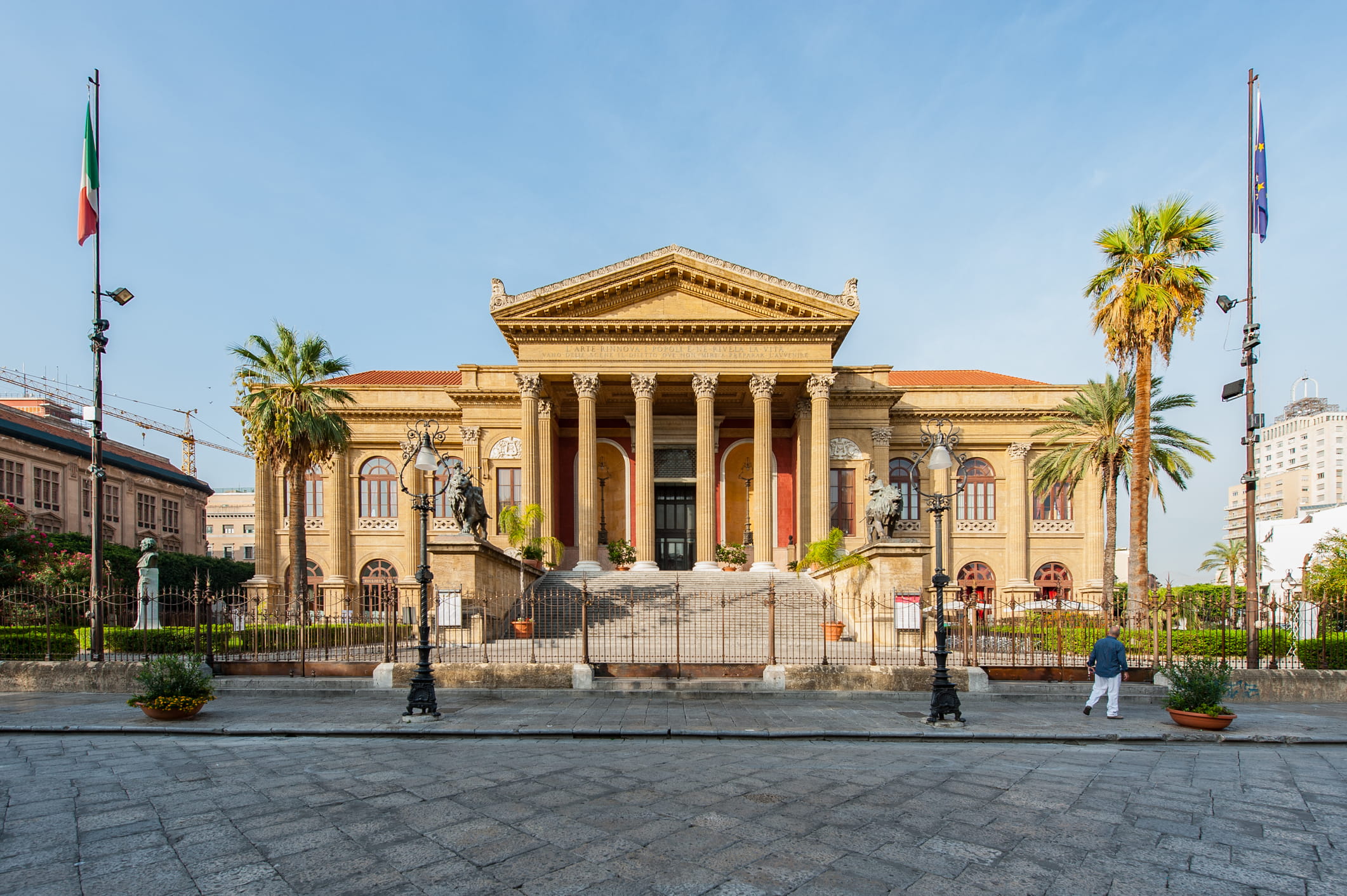 Palermo
Palermo and its theatre: a city at "massimo" velocity May, 17 2021

Whether you are an art lover or a history buff, whether you want to enjoy good food, the crystal-clear sea, amazing views or are just itching to get to know a great people, I am fairly sure that over recent years Palermo has been pretty near the top of your wish list of places to […] 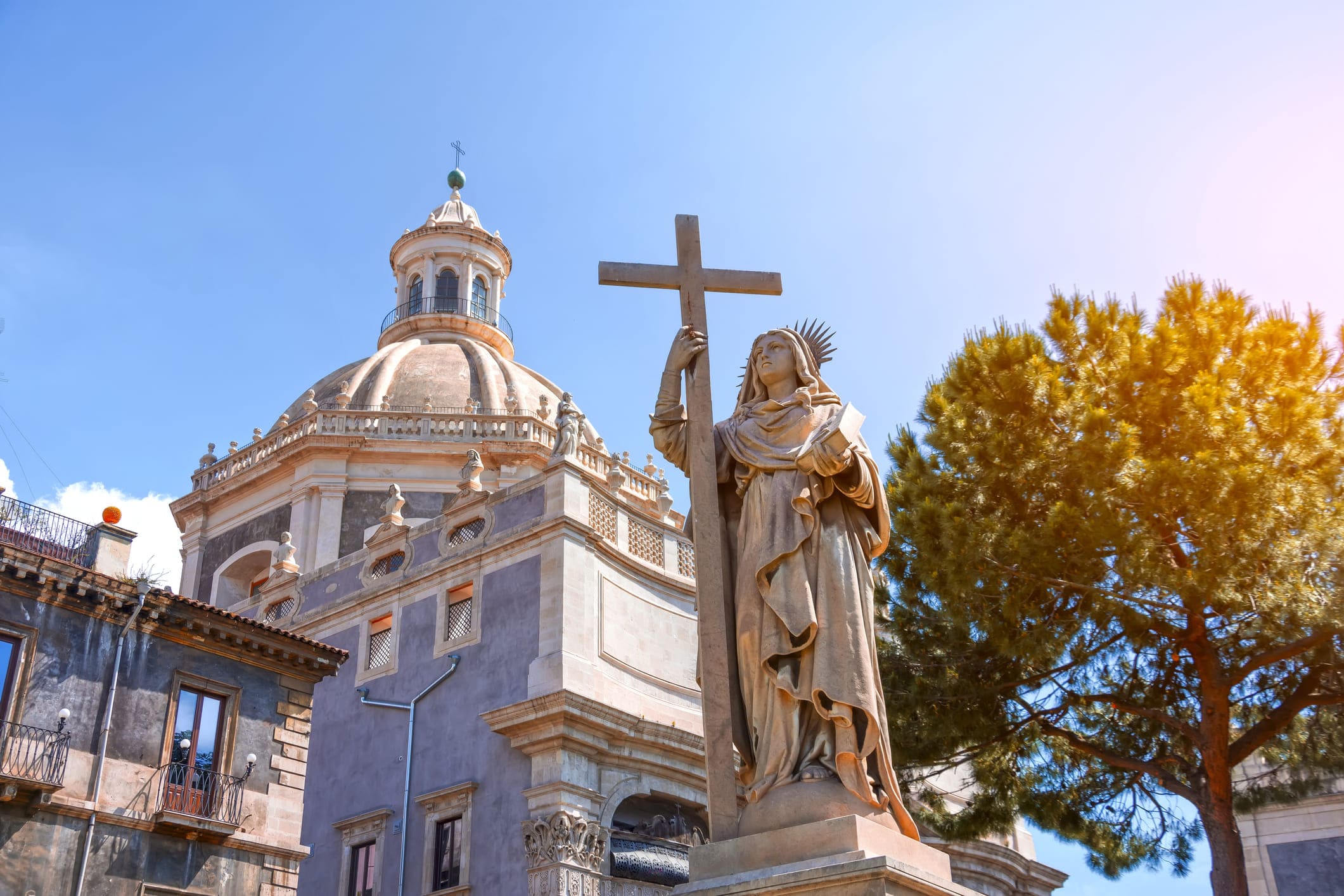 The Festa di Sant'Agata is the most important religious celebration in the city of Catania. Agata is the patron Saint of this city and is remembered in many ways throughout the year.